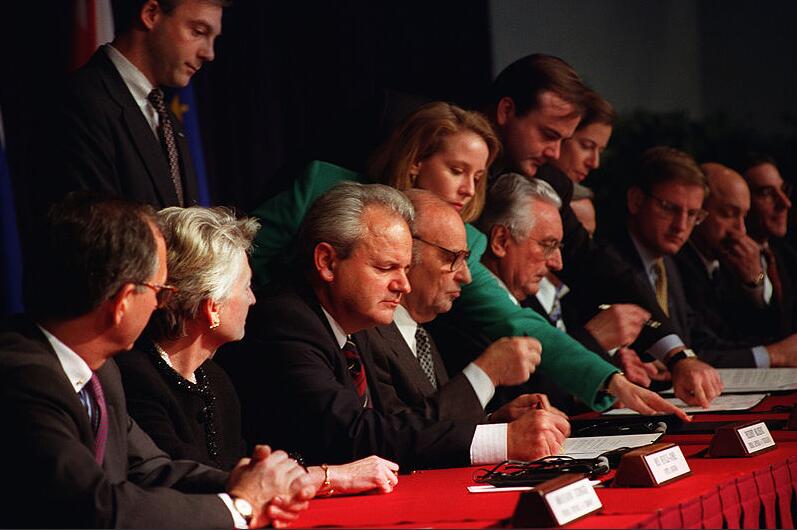 With the signing of the Dayton Peace Treaty in 1995, which sealed the end of the Bosnian War, the Balkan Wars also ended for the time being. The fact that the international community once again excluded Kosovo from international negotiations, however, also heralded the end of the status quo regarding the controversial status of the southern Serbian province. While Serbia was initially tired of war, there was resistance in Kosovo to President Rugova, whose critics increasingly viewed his policy of peaceful resistance as having failed. As an immediate reaction, the name UÇK first appeared in 1996(Ushtria Çlirimtare e Kosovës, Kosovo Liberation Army) in Kosovo, an initial secret organization that raided police stations and settlements of resettled war refugees from other former Yugoslav republics. This intensified its activities in the autumn of 1997. The central Kosovan region of Drenica became its stronghold, in which representatives appeared publicly for the first time, ie at a funeral of victims of Serbian police operations. In March 1998, Belgrade launched a major offensive by Serbian police and military units in Drenica and the border region with Albania, through which the KLA supplied itself with weapons supplies. One of the leaders, Adem Jashari, died during an operation in Drenica, as well as dozens of family members. The Serbian policy of scorched earth, the burning down of Albanian settlements and the expulsion of the population, gave the KLA an increased influx and set in motion a spiral of escalation of violence. Politically, a split developed among the Kosovar Albanians. President Rugova and his LDK, who were increasingly put on the defensive by the UÇK, won a new political mandate in parliamentary and presidential elections that same month – although the elections had been boycotted by several parties.

In a major offensive that led to several hundred thousand Albanian refugees and displaced persons and was accompanied by increasing international reports of massacres by Serbian-Yugoslav security forces against the Albanian civilian population, Belgrade ended the rule of the KLA over contiguous areas in Kosovo in the summer of 1998, but at the same time continued to isolate itself international. After threats from NATO, the USA and the EU about military intervention or air strikes, President Milošević agreed in October to a proposal by the US mediator Richard Holbrook, which included a Serbian troop withdrawal from Kosovo, NATO air surveillance, the deployment of a 2000- international OSCE observer mission and extended autonomy for Kosovo. The agreed ceasefire between the Serbian-Yugoslav security forces and the KLA only lasted until December, while the international search for a permanent political solution was unsuccessful.

The finding of 45 Albanian bodies in the village of Reçak (Serbian Račak) in January 1999, identified by the Kosovarban side and the head of the OSCE mission William Walker as a Serbian massacre of Albanian civilians, and in Belgrade corresponding to earlier Serbian massacres in the Balkan Wars When Albanian self-staging was dismissed for propaganda purposes, tensions between Serbia and the international community increased. Preparatory actions by NATO for a military intervention finally paved the way for the Rambouillet Peace Conferencenear Paris. According to ESTATELEARNING, a Serbian and a Kosovar delegation – the latter a political unity delegation of all relevant political forces, led by the head of the UÇK’s political directorate, Hashim Thaçi – negotiated with international mediation. At the same time, the Serbian expulsion campaigns are continuing in Kosovo. On March 18, after the resumption of negotiations, the Kosovar side signed the agreed agreement. However, the next day the Serbian side finally rejected it. After the failure of the negotiations, OSCE monitors began withdrawing from Kosovo and the Yugoslav Army launched a new offensive while NATO completed its war preparations. After a last failed mediation visit by US negotiator Holbrook to Milošević in Belgrade on March 23, NATO’s Kosovo (air) war against Serbia, which is not mandated by the United Nations – not least because Russia, and more indirectly put China on the side of Belgrade.

In the period between 24 March 1999 and 10 June 1999 were flying up to 1,000 combat aircraft as part of the NATO operation “Allied Forces” attacks on military and civilian targets in Kosovo and Serbia (Montenegro, whose political leadership increasingly since 1997 political distance from Belgrade had largely stayed out of the Kosovo war). The NATO air war, known as “humanitarian intervention”was legitimized, pursued the goal of ending the expulsion of the Albanian population by Serbian-Yugoslav units and moving Milošević back to the negotiating table. The participation of the Federal Republic in the activities of the military alliance represented the first German war effort since the end of World War II. This decision, taken by the first red-green federal government that had just come into office, was accompanied by fierce socio-political debates and disputes.

All the more so as the implementation of NATO goals proved difficult. In the first few weeks, Milošević showed no signs of giving in, on the contrary: Yugoslavia declared a state of war and broke off diplomatic relations with the USA, Great Britain, France and Germany. Milošević used the war situation for an unrestricted policy of systematic ethnic cleansing of the Kosovar Albanian population. Units of the Yugoslav army, the Serbian police and paramilitary groups, which had already been deployed in the Croatian and Bosnian wars and played a central role in expulsion policy and war crimes, were involved in this. That policy included murder, among others of prominent Albanian representatives such as the human rights lawyer Bajram Kelmendi and the politician Fehmi Agani, the burning of entire settlements and mass rapes. At the end of March, around half a million Albanians had already been displaced, half of them flown to neighboring Albania and Macedonia. From the beginning of April they received humanitarian support through an international airlift.

From a military point of view, the shutdown of the Yugoslav air defense planned by NATO turned out to be much more difficult than expected, also because of the bad weather conditions in spring. NATO therefore went over to phase 2 of its attack plan early on, and flew air strikes on troops, barracks, weapons storage facilities and other military infrastructure, now also near and in cities – which led to increasing “collateral damage” and civilian casualties while the actual ones military and political goals remained unattainable.

In mid-April, NATO therefore threatened to deploy ground troops for the first time, while a first attempt at mediation by Russia’s chief negotiator, former Prime Minister Viktor Tschernomyrdin, failed because of Milošević’s resistance. The situation only began to turn in May, when the G8 gradually came to an agreement on a political solution including an international protection force for Kosovo under a UN mandate. Although President Milošević initially refused to accept this solution, he slowly embarked on the path of giving in, not least after the intensification of air strikes and expansion to civilian infrastructure, among other things, led to the extensive failure of the power supply in Serbia.

At the beginning of June, the NATO countries and Russia agreed on a peace plan, and the two negotiators for the EU and Russia, the Finnish President Martti Ahtisaari and Chernomyrdin, persuaded Milošević to agree. The plan included the complete withdrawal of Serbian troops from Kosovo, the disarmament of the KLA, the return of all refugees and an international protection force under a UN mandate, while Kosovo was to remain part of the Federal Republic of Yugoslavia under formal law. After further negotiations between NATO and the Yugoslav army on the military details, the so-called Kumanovo Agreement was agreed on June 10th – after the negotiation venue in Macedonia. It regulated the withdrawal of the Serbian-Yugoslav units within 11 days and ended the NATO air strikes.

The extent of the immediate consequences of the war cannot be precisely quantified. As a result, around 10,000 people died during the fighting, most of them Kosovar Albanians. In addition, there are a large number of people, mostly civilians, who were victims of abuse, including rape. According to the ICRC (International Committee of the Red Cross), almost 3,000 people were missing in 2000. Some of these fates have not yet been clarified. The Kosovo report of the Independent International Commission on Kosovo, which attested the Serbian side to a systematic policy of ethnic cleansing, put the number of refugees during the conflict at 863,000, in addition to 590,000 IDPs (internally displaced persons – dt.: Internally displaced persons) – this corresponded to almost all of the Albanian majority population of Kosovo. According to the European Commission, well over 120,000 residential buildings were destroyed in connection with the conflict. 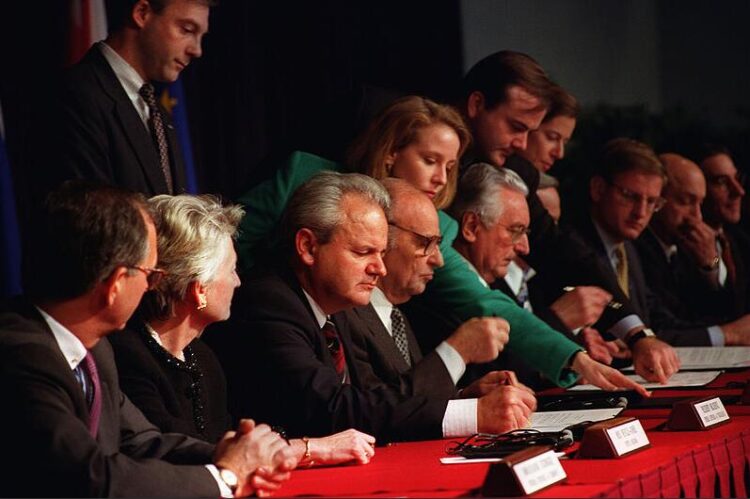